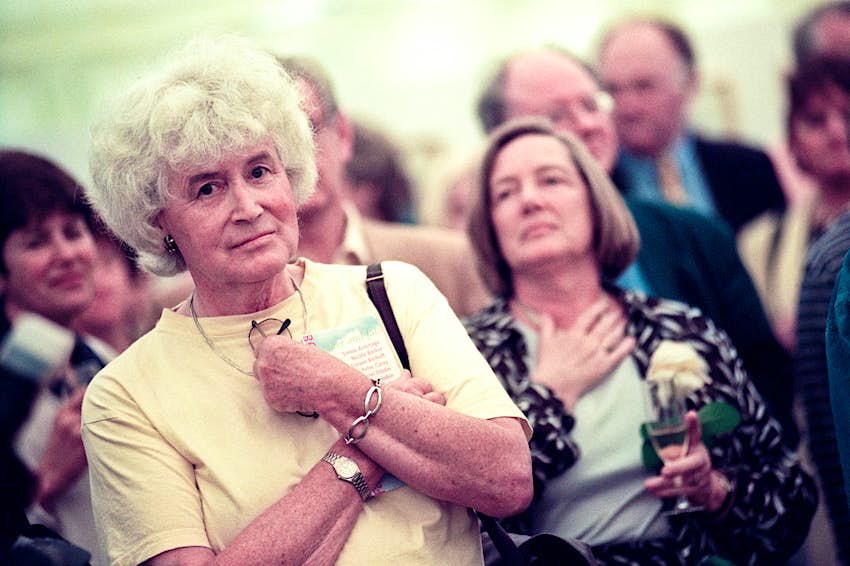 Jan Morris passed away on Friday morning at Ysbyty Bryn Beryl, a Welsh hospital on the the Llŷn Peninsula, at the age of 94. Born in 1926 in Somerset, her storied career started with a stint at the Western Daily Press in Bristol before she joined the army and served in World War II as an intelligence officer in Palestine and Trieste, Italy. After the war, Morris worked for The Times as a sub editor and two years later was sent on the assignment of a lifetime to cover the summit of Mt. Everest achieved by Colonel John Hunt, Tenzing Norgay, and Edmund Hillary in 1953.

Those early experiences were the foundation of a prolific and influential career as a journalist and author. Morris covered destinations from Hong Kong to Oman, Sydney to the South Africa in dozens of magazine and newspaper features, as well as books that spanned travel, history, biography, and memoir. One of her first full-length works was Coast to Coast, a family travelogue of the United States at the height of its post-war glitter. Morris spent much of the 1970s writing and publishing The Pax Britannica Trilogy, an exhaustive history of the British empire – indeed, her travels and nationality gave her a bird's eye view of the dawn of the post-colonial era. Even Morris's fiction was steeped in place, in particular Last Letters from Hav and Return to Hav – a pair of short post-modern novellas that fictionalized some of her long-term observations about the Middle East and cast them through the lens of science fiction. Last Letters was short listed for the 1985 Booker Prize.

Despite her success with travel writing and numerous awards, Morris often chafed at categorization, uncomfortable with the confines of genre or even the idea that she was strictly a place-based writer. In a 1989 interview with The Paris Review she observed, "I resist the idea that travel writing has got to be factual. I believe in its imaginative qualities and its potential as art and literature. ...I think of myself more as a belletrist, an old-fashioned word. Essayist would do; people understand that more or less. I believe my best books to be more historical than topographical."

Twenty years into her career, in 1972, Jan Morris traveled to Casablanca, Morocco for gender affirming surgery and ceased to use the male given name James personally or professionally. She published a book about her transition in 1974, noting that she had felt since she was a small child that she had been born in the wrong body. “I no longer feel isolated and unreal," she wrote. "Not only can I imagine more vividly how other people feel: released at last from those old bridles and blinkers, I am beginning to know how I feel myself.” Though she was forced to legally divorce her wife upon returning from Morocco – same-sex partnerships not being legal in the UK at the time – Morris and her wife Elizabeth were able to obtain a civil union in 2008. Their marriage lasted the rest of Morris's life, and spanned 71 years.

Morris never retired from writing; she published her final book, Thinking Again, in March of 2020. It collects a series of daily diary entries penned between 2018 and 2019, which range from personal reminiscences to reflections on Welsh nationalism and current affairs like Brexit. Though she was by then sticking close to her home in Llanystumdwy, Morris's final work still conveys a deep and abiding passion for people and place and the acute observations that drew many to her oeuvre. But her legacy is broader and deeper than her writings, encompassing nationality and identity as well. She will be remembered not just as an author, but also as a pioneer for women – and particularly trans women – both in travel and in publishing. Indeed, what Morris once said of libraries could well be said of her life – "Book lovers will understand me, and they will know too that part of the pleasure of a library lies in its very existence.”

How to have a big weekend in Dallas, Texas

11 min read • Published about 1 hour ago